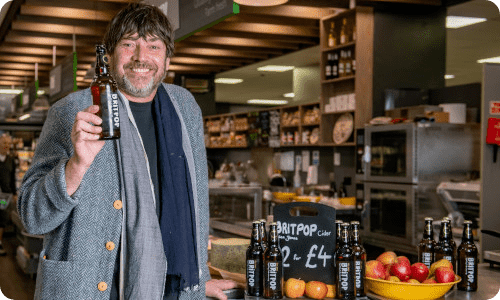 Blur bassist and cheesemaker, Alex James, has launched his Britpop cider in-stores for the first time.

It has now launched exclusively at 24 of Your Co-op Food Market stores across Gloucestershire, Warwickshire, Oxfordshire, Shropshire, and Staffordshire.

Your Co-op Food Market is one of the 24 food stores operated by The Midcounties Co-operative.

To celebrate the launch, Alex James visited the store in Chipping Norton where he took part in live cooking demonstrations with Denyce Blake, the in-store chef where they made several tasty dishes including Sausage casserole and Apple and Carrot cider cake, all using his Britpop cider.

The 5.5% a.b.v. fresh juice, oak-conditioned cider is made by one of The Midcounties Co-operative local suppliers, Westons Cider Mill, in Herefordshire, with bitter-sweet and sharp apples.

Britpop will join The Best of Our Counties offering which is a unique range of locally and ethically sourced food and drink ranged in Your Co-op Food Market stores. All products within the range are sourced from across the Society’s trading region and neighbouring counties by working with farmers, growers and producers to craft exceptional products for its members and customers.

Alex James said: “For centuries, the French have been very clever at shouting about all the things they can do with grapes, whereas Britain has apples, and we don’t prize them enough. We grow hundreds of traditional British varieties here on the farm and have been experimenting with different cider recipes for years.

We launched Britpop last month at The Big Feastival and had such an amazing reception with the cider becoming the festival’s bestselling drink. It’s great to be able to finally launch it in Your Co-op Food Market stores as part of its Best of Our Counties range to really help hammer home how high-quality the produce grown in Britain really is.”

Working with local suppliers and showcasing the best of local food is so important to us. Customers know they can rely on us to provide high-quality, fresh and seasonal produce, and that by shopping with us they’re helping to support local suppliers and communities, which also helps to reduce food miles and protect the environment.”

The Midcounties Co-operative which is one of the largest independent UK co-operatives and is fully owned by its members. Customers have the option of becoming a member of the Society, giving them access to exclusive member-only deals as well as special offers from across the Your Co-op group of businesses. Members also have a say in how the Society is run, including the work it does to support local communities in partnership with local volunteers and community groups.

For more information about becoming a member of The Midcounties Co-operative and receiving exclusive member rewards and offers, please visit the website or ask in your local Your Co-op Food store.