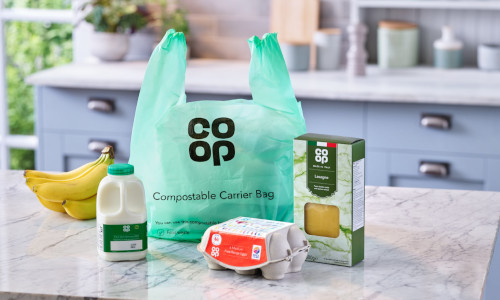 The Midcounties Co-operative has announced that, from today, it will no longer sell single-use plastic carrier bags in any of its 225 Food stores, removing an estimated eight million from circulation each year.

The removal of single-use plastic bags is part of the Society’s commitments to tackle plastic pollution and sees them meet their pledge to do so three months ahead of their original target date.

The single-use plastic bags have been replaced with fully compostable bags in 146 Co-op Midcounties Food Stores, which can be doubled up to use as liners for food waste bins. The compostable bags are available in stores across Oxfordshire, Gloucestershire, Shropshire and Warwickshire, and the Society is working with local authorities to roll these out further in other areas in the coming months.

The move to compostable bags is part of The Midcounties Co-operative’s 1Change campaign which aims to raise awareness of the issues caused by plastic pollution and encourage members and customers to make more sustainable choices to help reduce their impact on the environment.

Rupert Newman, chief retail officer at The Midcounties Co-operative, said: “Social responsibility is at the heart of everything we do, and we’re so pleased to have reached our target of removing all single-use plastic carrier bags ahead of schedule.

It’s a really important milestone for the Society, but the fight against plastic pollution doesn’t stop here. We’re committed to keep making change and encouraging our members and customers to work with us to build a better environment for the future, whether that’s by simply using a reusable water bottle or coffee cup, carrying a bag for life, or taking the time to join in on local community clean-up activities.”

Last month, The Midcounties Co-operative was named Responsible Business Champion 2020 by Business in the Community for its work to remove two tonnes of single-use plastic from its operations.