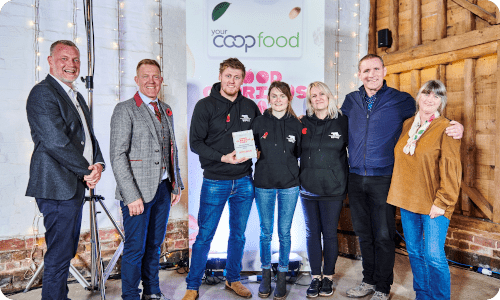 Gloucester-based, Wholly Gelato, has been awarded a £10,000 investment into its artisan, Italian-style gelato business after being named the winner of The Midcounties Co-operative’s Food Glorious Food competition. 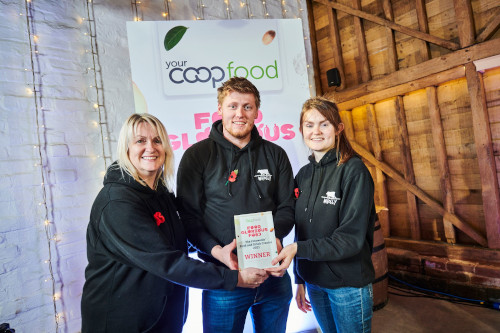 Food Glorious Food, now in its second year, is a competition run by the Society to help support local suppliers by awarding stock listings in a selection of its Your Co-op Food stores for finalists and making a monetary investment into the winning business.

After launching in 2019 and being paused as a result of the Covid-19 pandemic, the competition eventually reached its finale this week (Wednesday 10th November) with a Dragon’s Den style event at Over Barn in Highnam. The event saw a panel of industry experts judge the eight finalists against a range of criteria including the transparency and traceability of their products, as well as being locally sourced from and made in the Cotswolds.

Wholly Gelato was revealed as the winner for its tasty choice of Italian-style gelato. Made from the milk of its very own herd of cows on Hobbs Dairy farm, the business was launched by Emily Hobbs as a way of diversifying and adding value to the milk that’s produced on the family-run farm in Elmore. 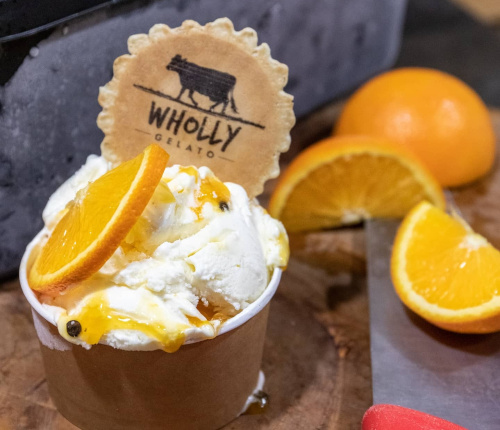 Products from Wholly Gelato, as well as the other seven the finalists, will be stocked in-store as part of the Society’s Best of our Counties range which offers fresh, locally sourced seasonal produce from each store’s home or neighbouring county to help support local farmers, suppliers or small food producers.

Rupert Newman, Chief Food Retail Officer at The Midcounties Co-operative, said: “As part of our commitment to promoting and supporting locally produced food and drink we are always on the lookout for exciting, innovative new ideas.

That’s why we launched our Food Glorious Food competition three years ago, to help support local suppliers and showcase some of the best produce that Britain has to offer.

The standard of entries was incredibly high this year, and a huge congratulations has to go to the team at Wholly Gelato who scooped up the winning award. All of the finalists were incredibly passionate about their products and we’re looking forward to stocking them all in selected stores next year as part of our Best of our Counties range.”

Emily Lee (née Hobbs), from Wholly Gelato, said: “We’re a hard-working family-run farm, and to win the competition and this investment from The Midcounties Co-operative means so much to us and our business. Our homemade gelato has been so popular at our farm since we launched it back in 2018, and we’re really looking forward to it being listed in some of the local Your Co-op Food Market stores. We can’t wait to hear what customers think!”

The Midcounties Co-operative is one of the largest independent UK co-operatives and fully owned by its members.

Customers can become a member of the Society, giving them access to exclusive member-only deals as well as special offers from across the Your Co-op group of businesses. Members also have a say in how the Society is run, including the work it does to support local communities in partnership with local volunteers and community groups.

For more information about becoming a member of The Midcounties Co-operative and receiving exclusive member rewards and offers, please visit the website or ask in your local Your Co-op Food store.