Midcounties report & accounts published, demonstrating the support given to its colleagues, members, customers and local communities 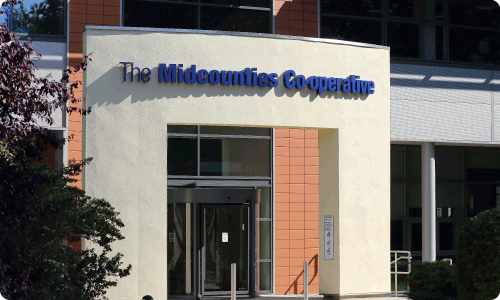 Published 14 May 2021 in Society Announcements

The Midcounties Co-operative has demonstrated its resilience after announcing operating profits before significant items & share of profit payments of £14.0m, as the Society managed the impact of the coronavirus pandemic while continuing to support its colleagues, members, customers and local communities.

The statutory accounts record a gross sales reduction of £406m, one-third lower than last year with profitability after the cost of Share of Profits payments at £12.7milion.

Like most other cooperatives, Midcounties saw an increase in volumes & profitability in its food retail & funeral businesses. The performance of the Society’s food retail business saw gross sales increase by 11% as more customers chose to shop locally during the pandemic.

However, the Society, which also operates travel, childcare, utilities, and healthcare businesses, faced significant challenges across its other trading groups. Lockdown restrictions meant that the Society’s Travel business was brought to an abrupt halt, resulting in a 91% fall in gross sales, while occupancy at its Childcare nurseries was far lower than previous years, resulting in gross sales down 22% for the year.

As an ethical and values-driven Society, Midcounties’ response to these challenges was to go further in supporting their colleagues, members and communities.

The Society reports spending almost £5 million on personal protective equipment and topping up pay for colleagues who were furloughed, as well as launching from scratch a home delivery service for the most vulnerable people. Working in partnership with more than 1,000 volunteers the service has now made more than 100,000 deliveries and the service will continue to support vulnerable people until at least June. The Society has also continued to support those impacted by the economic effects of the pandemic with more than £50,000 in donations to local food banks. The Society also provided £78,000 to a Community Restart Fund to help those helping others.

The Society increased its partnerships with local suppliers during the pandemic, adding 33 new suppliers in its food business, many of whom had been hit by the virtual closure of the hospitality industry. These products are a core part of the Best of our Counties range which continues to grow in popularity, passing £16 million sales in 2020.

Midcounties is the only consumer co-operative to operate a large travel or childcare business, and both sectors were particularly hard hit by the pandemic.

In travel, all 78 branches were closed for large proportions of the year. Nevertheless, the business remained committed to providing the best possible service to its customers and members, establishing a virtual customer contact centre so that colleagues could keep in contact with more than 75,000 affected customers, and working to refund more than £100m to customers who were unable to travel.

Childcare saw reduced occupancy rates as a result of the lockdowns, but continued to prioritise supporting its families. It kept as many of its 45 nurseries open as possible to provide childcare for key workers and paused fees for the majority of parents for much of the year, reflecting the fact that they were unable to send their children to its nurseries. It also established a fund that raised £40,000 to cover childcare costs for key workers and provided free childcare for those who had been impacted by redundancy.

Despite the significant impacts of the pandemic, the annual results underline that as a diverse and robust business Midcounties is well-placed for future growth. The Society continued to open stores in the last year, regardless of Covid challenges, albeit at a slower rate than originally planned. This investment & expansion is planned to increase significantly this year, with three new food retail store openings already and a further three anticipated in the next two months, at an expected investment value of almost £3 million.

Midcounties Group Chief Executive Phil Ponsonby said: “As an ethical and values-driven Society we always seek to strike the right balance between delivering profits for our members and fulfilling our purpose of creating a better, fairer world and enhancing the lives of our colleagues, members, customers and the communities we serve.

This has never been more important than during the last twelve months. Both the Board & I are extremely proud of how all our 8,000 colleagues stepped up to the challenges of the pandemic and helped thousands of members and customers in so many ways, and we are indebted to them for their enormous contribution.

They helped our Society to deliver a positive financial performance despite the difficulties many of our businesses faced.

While the pandemic has undoubtedly had a significant impact, with our travel and childcare businesses especially affected, it has also underlined the strength of our diverse and robust trading groups and we remain committed to investing for the future.”