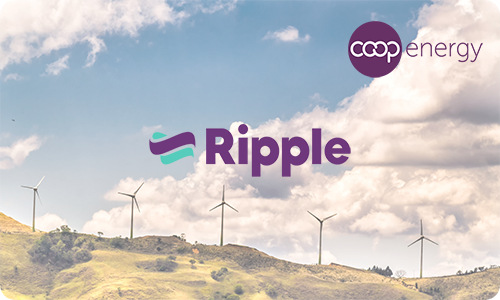 Build a cleaner, better world and lower the cost of your energy by owning a slice of the UK’s first consumer-owned wind farm.

Until now the only way to own a source of clean energy has been via solar panels.  Ripple estimates owning a tiny part of a large-scale wind farm could be up to 75% cheaper. If you move home, you simply tell Co-op Energy or Octopus Energy and they supply the electricity to your new home.

Customers will own part of the wind farm by buying shares in the co-operative that owns Graig Fatha.  Around 2000 customers will be able to join this first pilot project. Ripple plans to launch more projects over time.

Ripple wants to transform energy ownership. Its mission is to make clean energy ownership affordable and accessible for everyone, everywhere. Graig Fatha is the first step to making that happen.

Co-op Energy & Octopus Energy are supporting as the launch partner for this project due to its credentials in community power generation. Co-op Community Energy, the joint venture between Co-op Midcounties and Octopus Energy, has already begun providing energy to customers from small-scale community generators, enhancing investment in renewables & communities, and driving forward the decentralised energy grid of the future.

“What could be better than owning a bit of a wind farm to supply your home with renewable, low-cost power. People are ready for change.  They want to create a better, cleaner future and we can enable them to do it.

“The move to a zero-carbon world opens up completely new ways of doing things. You can’t own a bit of a coal or nuclear power station to supply your home with electricity, but you absolutely can own a bit of a wind farm.  Huge change is now possible, and people are embracing it."

“Co-op Midcounties have been working with Ripple for a number of years, and we at Co-op Community Energy are thrilled to continue to support their first site at Graig Fatha. The partnership with Ripple is a significant milestone in changing the way in which we power the UK, giving more people the opportunity to directly own how their electricity is generated.

As the leading supporter of renewable, community-generated power in the UK, Co-op Energy and Co-op Community Energy is now working with more than 80 community generation projects, providing expertise and ensuring that generators are paid a fair price. Making a positive difference is fundamental to our cooperative values and we’re proud that anyone joining Ripple will be helping to decarbonise the planet while supporting local communities, not just at Graig Fatha, but across the country.”

“Affordable investment in your own clean, green wind farm is a huge leap forward for the energy grid of the future. Investing in more renewable energy and powering your own homes when the wind is blowing can end our reliance on dirty fossil fuels faster than we hoped.

“We’re excited to get to work with Ripple Energy to make this investment more accessible and affordable than ever before. Soon anyone can benefit from the ‘green dividends’ this will provide, offsetting their own energy bills with an investment in the energy grid of the future. We’re proud to be championing community energy projects such as these and leading the way in innovative solutions to the climate crisis.”

*note, due to current low power prices partly due to Covid-19, savings are lower, around 15% of a typical electricity bill.

Cost comparison based on scheme required to generate 2,900kWh.  Rooftop solar costs are based on e.on solar’s website (correct on 18.03.20, assuming a 11% capacity factor) compared to the cost of Ripple’s first wind farm.