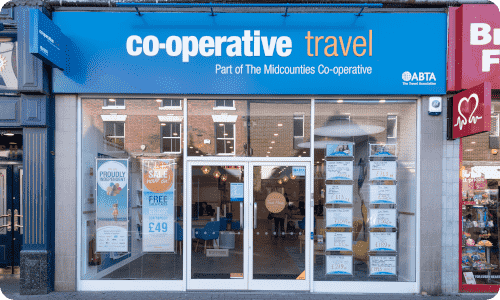 Co-operative Travel, the retail travel division of Co-op Midcounties, the UK’s largest independent consumer co-operative, has announced that it intends to enter into an agreement with Central England Co-operative to transfer 16 of its travel branches and the colleagues who work in them, to join Co-operative Travel and re-open by mid-August, subject to consultation.

The deal represents the third major deal by Co-op Midcounties in the last 12 months to expand its core businesses, following the purchase of four Warner’s Budgen food stores in the Cotswolds and three Childcare nurseries in the North East in late 2019.

The transferring stores supported 25,000 passengers with their travel arrangements over the last 12 months and their addition sees Co-op Midcounties consolidate its position as the UK’s leading travel Co-operative.

The transfer is an example of the wider co-operative movement working together to reduce costs, whilst continuing to offer co-operative solutions to members’ travel needs. 78 colleagues will join Co-operative Travel and the move brings Midcounties’ portfolio of Co-operative Travel shops to over 70. The new branches will complement the existing trading areas whilst providing further growth in the East of England. Customers across the country are also able to book their holidays online at www.cooptravel.co.uk

Rad Sofronijevic, chief operating officer of Midcounties Co-operative’s travel division, said: “These have been extraordinary times for the whole travel sector, but with lockdown measures easing we’re well placed to grow from strength to strength. Travel is core to Midcounties’ long-term strategy and when we learned that Central England Co-operative was looking to emphasise its focus on other divisions and move away from Travel, we wanted to take the opportunity to bring these branches under the Midcounties retail umbrella and further strengthen our offering. With our scale and expertise, we look forward to helping grow and nurture the former Central England Co-operative branches to ensure their success in the future”.

The majority of Midcounties’ existing Co-operative Travel branches have now re-opened following lockdown, with the remaining opening on 13 July.  All new branches joining from Central England Co-operative will open by mid-August and will also operate using the new appointment system.

Natalie Turner, head of branches for Co-operative Travel, said: “I am delighted that we will soon welcome these additional branches to our portfolio. The branches are well located and allow Midcounties’ Co-operative Travel to expand our presence across several new counties in England.

We look forward to welcoming our new colleagues into the fold, helping them to navigate the new normal in travel and grow and succeed under Midcounties’ retail Co-operative Travel umbrella.”

For more information on Co-operative Travel, go to www.cooptravel.co.uk.