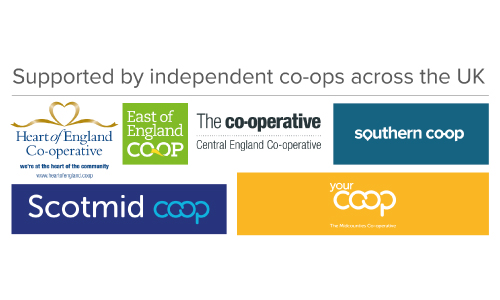 The Midcounties Co-operative has joined a national partnership of well-known brands that are raising money to support the NHS by selling gifts that give a little back this Christmas. This nationwide initiative is also being supported by other local co-ops nationally, Starbucks and big brands such as Marmite.

From this week customers will be able to buy a festive bouquet from Midcounties Co-operative stores, with £1 from each sale to be donated to the national campaign.

Pete Westall, Chief Values Officer, the Midcounties Co-operative, said: “Throughout the pandemic, we’ve all been inspired and humbled by the remarkable efforts of our NHS workers, and we know that they continue to face up to incredible challenges on a daily basis.

“In May we raised over £40,000 to help pay for childcare support for NHS staff and key workers and our colleagues, members and customers have continued to give support to those who need it most in our communities, whether that’s through home deliveries to the most vulnerable or raising funds for local food banks.

“As we approach Christmas, we know that our colleagues, customers and members will want to show their appreciation for all those who work in the NHS and that’s why we’re proud to support the NHS Together campaign, which will help give something back to those who are on the frontline in tackling Covid-19.”

The national campaign, led by NHS Charities Together, is encouraging people across the UK to ‘give to those who’ve given us everything’ by buying presents for each other that support the NHS. On a normal year, it’s estimated that 400,000 NHS staff and volunteers will work over Christmas and this year it’s likely to be far more. The money raised from this campaign will go towards the organisation’s mission to provide vital funds which support NHS workers, volunteers and patients.

The Midcounties Co-operative is also supporting its local food bank partners this festive season by encouraging its members, colleagues and customers to donate to its food bank fund in-store or on online. All profits from the sales of the Society’s compostable bags in its food stores in December will also be donated to the fund.